Community involvement and contributing to charities is one of the highest priorities for Top Hat Provisions. We started almost two years ago as a grassroots idea dreamed up by a man focused on how he could contribute more to the world. In the beginning, more was an abstract concept, sometimes referring to volume of libations we brought to beautiful events, sometimes a larger picture of what we could do to give back. We have roots in both San Diego and San Francisco and managed to find organizations in both with which to flex our philanthropic muscle.

Elixir, declared ‘San Francisco’s Second Oldest Saloon’ was one of our first accounts and we assisted the owners in creating a cocktail for their Charity Cocktail on Tap program. This cocktail commemorates the heartwarming tale of The Golden Hydrant, which saved The Mission District from total destruction after the earthquake of 1906.

Each drink sold contributes $1 dollar to a rotating list of non-profits that support relief for annual wildfires in California and the American West. This past April, the 100th anniversary of the earthquake, Elixir donated 100% of the cocktails proceeds to the Novato Fire Foundation. We found great pride and joy in being able to contribute with the Elixir Mule; a derivation of the popular Moscow Mule utilizing Square One Botanical Organic Spirit, Top Hat Ginger Syrup and muddled rosemary, as well as three other rotating options.

The other organization we’ve been lucky to work with for the last two years is called Home Start,

based out of San Diego. It is an all-expansive group focused on strengthening families and providing tools to prevent child neglect and abuse. We have participated and donated to their Hallo-Wine event, an annual auction that raises funds to go towards their many different programs in place. Through Home Start, families can receive help with financial and career decisions, teach parents about Family Self Sufficiency and provide mental health services otherwise unattainable. They also provide support and shelter to young mothers and new families, helping with the First Five Steps and then continue to be a resource throughout some harder times they may face. The organization recently opened up a small thrift boutique so local San Diegans can contribute anytime, based on the idea of repurposing for a purpose. Home Start has provided one of the greatest services to San Diego by reaching out a hand to those in need. We look forward to all the opportunities we may have as a small company to do the same. 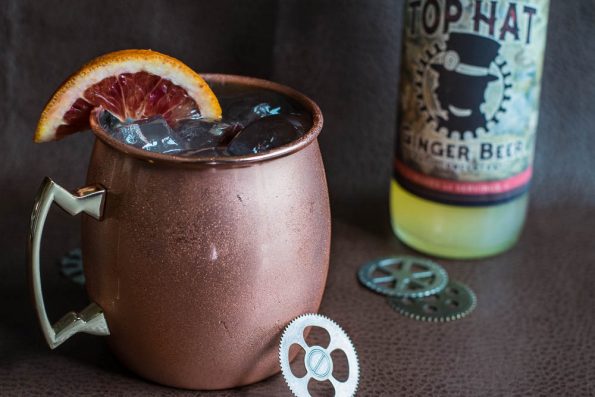 Grab your aviator goggles and fire up the dirigible, this steampunk themed 5 O’Clock Friday Cocktail is the Mules Verne! When we received our bottle of Top Hat Provisions Top Hat Ginger Beer Concentrate (one of the best ginger beers out there and only has one artificial ingredient!), we wracked our brains trying to come up with a cocktail that wasn’t a mule. However, we kept coming back to mule type drinks and decided to just go with it.

You might be asking why we went with a steampunk theme for a mule. Well truth is, we were completely inspired by the Top Hat Ginger Beer label which has a gentleman in a top hat in front of a large gear. Its completely aesthetic but we thought it was a great excuse to bring out the geek in us! If you are feeling adventurous, you could cut your blood orange garnish in the shape of a gear (we tried but our orange was way too ripe) to make your cocktail a bit more themed. 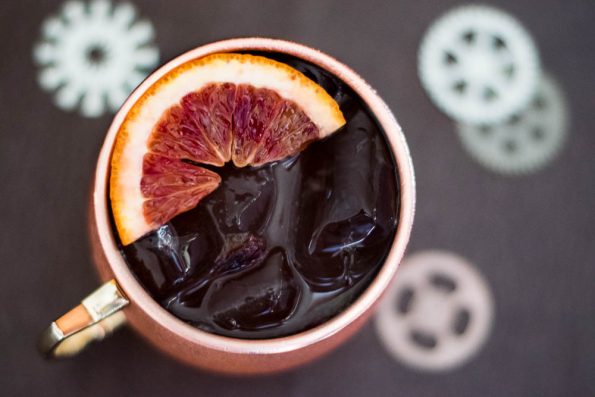 Top Hat Provisions is a San Francisco based craft beverage design, manufacturing & engineering company with a mission is to source, design, manufacture, deliver, engineer & activate the best craft beverage programs in the world. They install & support draft cocktail programs that are efficient, attractive & profitable for our clients & partners to operate. Contact them directly to learn more about their products and services.

We’d love to see your rendition of this cocktail! Make a Mules Verne, take a photo, and tag it with the hashtag #GeekEats! Cheers!

History: Ginger beer – so hot right now. Ginger beer syrup is even hotter because it’s easier for bartenders to make cocktails with and allows consumers to pour drinks to their own liking. San Francisco native Shane McKnight recognized this popularity and accessibility as an opportunity. McKnight is a veteran in the cocktail scene and at his day job, he “activates cocktail programs for bars at the national level.” He’s the founder of Top Hat Provisions. The name isn’t by accident. Since 2011, McKnight has worked an event in San Francisco called “The Edwardian Ball.” For those wondering, the Edwardian Period generally refers to most of the first decade of the 1900’s. Well there’s a shop at the event where you can buy clothing from that period from long coats to canes. And top hats. There’s top hats all over the place. McKnight notes “I made it a tradition to buy a top hat every year…. I have a lamp that has five top hats on it.” The whole thing is basically a drunk theme party. I guess when you wake up surrounded by top hats, you name your business after it. Based on that logic, my uncle should start a business recycling oldPlayboy magazines. Top Hat also provides ginger beer to major music festivals, like Coachella. There’s a lot of drunk moms at those things – someone’s gotta quench their thirst. He recalls ordering 1,500 pounds(!!!) of ginger beer for Coachella 2015. As demand continued to rise, McKnight realized making a ginger beer concentrate needed to be done “out of absolute necessity.”

In talking to McKnight, you can tell he knows his stuff and cares about his product. He resisted making a syrup until he found a company that was able to organically extract the vegetal and the heat. I know you don’t know what that really means, but basically it allowed McKnight to create and launch the ginger beer concentrate he envisioned in June of 2015. “The thing that was holding me back was that most ginger beers are spicy in the throat,” he says, adding that he feels many ginger beers on the market are just “ginger ales on steroids.” “Our spice stays in the mouth and a little bit close to the lips,” McKnight says. Top Hat Ginger Beer has three important elements to it that McKnight believes provide balance. The first is the heat of the ginger that we just mentioned. The second is the sweetening agent; Top Hat uses organic cane juice as opposed to pure cane sugar or something like honey because McKnight believes it provides the best taste. The third important element of the ginger beer is it’s acid balance. Like most ginger beers, Top Hat contains citric acid and lemon juice, but it mixes in a little bit of apple cider vinegar to keep the lemon flavors subtle. Based on the balance of sweetness, acidity, and spiciness, McKnight tells us he believes you’d have a hard time ruining a drink regardless of the amount of the ginger beer concentrate you use. In that regard he calls it “very, very forgiving,” which is also what I can already tell one of our staff members will hope we will be tomorrow as he continues to drink moscow mules while we write this review.

Where to get: Top Hat Ginger Beer is growing quickly on the west coast from California to Oregon, but the most reliable way to get your hands on it is ordering a bottle via Amazon (small – 375ml or large – 1L). (At the this this review was written, Top Hat Ginger Beer was just being introduced by Amazon, so if it isn’t available yet, check back in a few days.)

Nose: Ginger; acidic. Smells like it has a bit of zip on it. Maybe the word I’m thinking of is sour. The smell indicates you might need to wear the seat belt for this one.

Taste: Lemonade; ginger spice; pepper; grape. You taste the normal ginger beer elements, and I’ll get to those, but there’s one flavor that really stands out as unique – grape. The label doesn’t list grape as an ingredient, so the flavor is likely a result of how the other ingredients pair together with the apple cider vinegar, but it’s definitely there. It is actually kind of a grape-apple flavor. Very different. The signature flavor in Top Hat Ginger Beer is lemon. It’s a sweet, lighter lemon, like a shrubbed lemonade. The grape and lemon flavors work in tandem together to impart a very different flavor to this particular ginger beer. In fact, the ginger itself isn’t that strong in the flavor profile. You get a little bit of the ginger’s spiciness in the nostrils on the initial few sips. The spice mostly stays on the tongue. The flavors that stick here are aside from ginger are tart, sweet lemon and mild grape that’s reminiscent of sparkling grape juice.

Finish: Tart lemon; lime; spice. You’ll taste the lemonade flavor fade into a more tart lime flavor. The end of each sip is where the ginger beer’s spicy notes seem to take up residence.

Rating: Top Hat Ginger Beer isn’t your average take on the category. This is ginger beer for non-ginger beer drinkers… if that makes sense. What I mean is that this doesn’t taste like a traditional ginger beer, despite containing all of the typical ingredients. It isn’t particularly hot and spicy. The ginger isn’t overly powerful. If you’re looking for a ginger beer full of citrus tasting notes, Top Hat Ginger Beer should be right up your alley. This is light and tart. It’s bright and sweet with a lemon flavor tinged with apple and grape notes, as well as a little bit of spice on the finish. It can be enjoyed on its own, but in small doses at a time. This seems to be tailored more for cocktails. The grape flavor most likely comes from the apple cider vinegar. It’s unexpected, but it works well with the lemon. This will probably be a little tart for some craft soda drinkers. I’d also prefer to taste a bolder ginger flavor, since it is of course, a ginger beer. But all and all, this is too different not to give a try. The use of apple cider vinegar in this is really a home run. Top Hat Ginger Beer is one of the strangest ginger beer I’ve ever tried, but also one of the most fun. If you’re a craft soda fan that also dabbles in the spirits, try Top Hat Ginger Beer in a Kentucky Buck.

P.S. By the time this review was completed, our staff member we mentioned in the beginning is, indeed, drunk.

This error message is only visible to WordPress admins